Like Alfamart, SBL has been on a launching spree. It has already opened 5 stores in the Greater Jakarta area earlier this year, and plans to add 10 more before the year ends. And despite the market shift, it felt comfortable enough to experiment with a larger retail concept, taking over some of Giant’s former locations in the process.

For Blibli, the deal lets it add a successful retail arm to its banner.

With the Blibli deal, the fresh foods-focussed grocery store chain spotted an opportunity to double down on its primary offering. The shift in Indonesia’s grocery sector, projected to be home to Asia’s fourth-biggest grocery market in 2022, is primarily due to a multi-dimensional change in consumer preferences. There’s a growing interest in healthier, fresher products. Consumers also want to shop in smaller batches and more frequently.

SBL was well-positioned to capitalise on these trends, thanks to the upscale Ranch Market and the more affordable Farmers Market. The deal now nets it the backing of a digital platform with substantial financial resources, thanks to Blibli’s Djarum link.

The e-commerce site ranks fifth in terms of traffic, lagging behind the much bigger and more prominent brands such as Tokopedia, Shopee, Bukalapak, and Lazada. It’s also not developed a specific niche or profile, except its positioning as an upscale shopping venue that it shares with SBL. 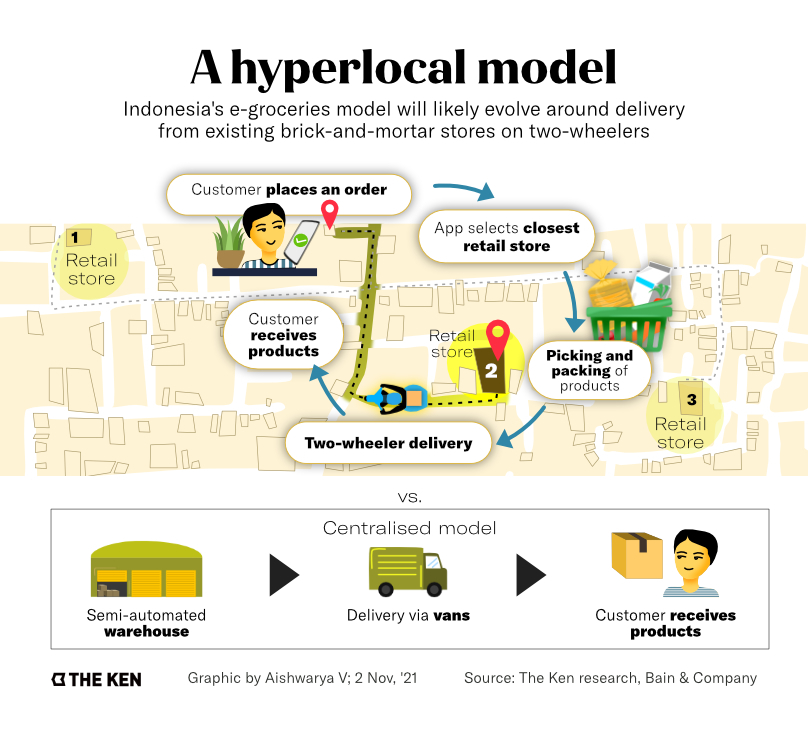 It wouldn’t be too much of a stretch to compare the deal with US e-commerce giant Amazon’s 2017 acquisition of high-end grocer Whole Foods. “At the simplest level, the deal represents a straightforward confluence of interests. Amazon needs food and urban real estate, and Whole Foods needs help,” The Atlantic wrote in June 2017, the days after the business world tried to make sense of the just-announced mammoth deal.

Whole Foods, though, needed the deal. The company was “in a tailspin” when it took the offer. Its stock price had been declining and revenue growth falling every year since 2012.

That’s not the case for SBL. In contrast to its mid-segment peers, the company grew nicely in the past couple of years, going from IDR 2.4 trillion (US$168 million) in revenue in 2018 to IDR 3 trillion (US$210 million) in 2020. Even the first year of the pandemic translated into revenue growth of 37% from the previous year.

Blibli will need to work extra hard to add value to its new brick-and-mortar subsidiary. It will need to take a long-term view. With a partnership such as this, it’s inevitable that the two will head into the e-grocery segment. However, bringing grocery online is particularly tricky in a market like Indonesia.

SBL’s growth over the last two years was sort of serendipitous, its offering coinciding with growing demand among the more affluent, urban Indonesians for healthier and fresher products.

“Ranch Market and Farmers’ Market aren’t affected by the same dynamics as hypermarkets like Giant,” said Ilham Kurniawan, an analyst at Fitch Ratings. The global ratings firm also publishes insights on the markets it operates in. “They address a different segment of the market. There is an appeal to that. They are playing in their own niche.”