However, for remote workers looking to stay in Thailand for extended periods, the combination of the Phuket Sandbox and STV make a compelling case for the island to be a launchpad for their itinerant lifestyle. A prime example is João Ferrão dos Santos, a Portuguese national who became a digital nomad via the Phuket Sandbox in September 2021.

When Santos had to pick a Southeast Asia base after getting a job at a climate change startup in Singapore, Thailand was “an easy choice” over the city-state. Thailand is comparatively more open to foreign travelers currently, he said.

“The pandemic definitely influenced my decision,” said the 33-year-old product manager. “It’s a good moment to be away from cities and be closer to nature, places with better weather and more outdoor facilities, so there’s a lower risk of transmission. With fast internet and a laptop, that’s basically what you need.”

Santos foresees spending the majority of 2022 exploring different destinations in Thailand, including Chiang Mai, Bangkok, and Koh Phangan, before considering a move to another country. 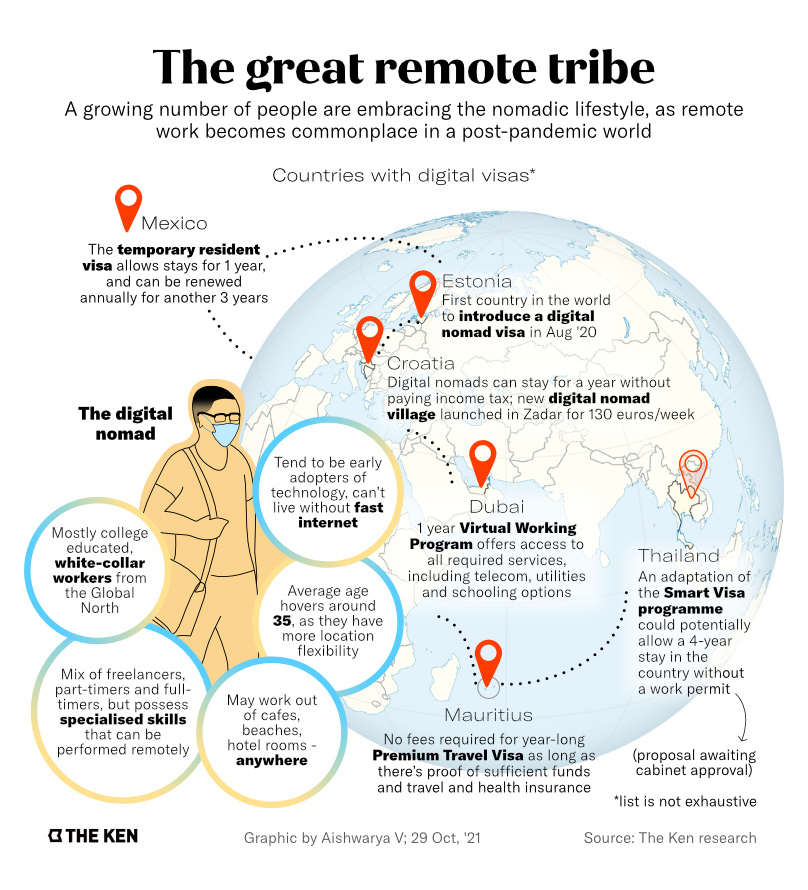 View from the ground

Before Phuket Sandbox, the island had never quite registered as a digital nomad destination, despite its long-standing success as a tourist hub.

Phuket accounted for nearly 25% of Thailand’s 40 million visitors in 2019, which kept its beaches busy, rooms filled and rentals high. The island was also ranked the 15th most visited place in the world by UK-based market research company Euromonitor International that same year.

It took the pandemic to make Phuket realise its potential as a digital nomad destination. While Covid struck a devastating blow to the island’s tourism-reliant economy, the resultant loss of tourists and tourism jobs exerted strong downward pressure on rentals, from condos to co-working spaces.

Apartment rental prices have dipped from $600 to $240 or $1,200 to $300, observed Harry Chen Henriksson, founder of Phuket-based Chinese Market Consulting, which specialises in real estate and investment. “Prices became more competitive during Covid. Rentals in Phuket are now comparable to Bangkok and Chiang Mai.”

Henriksson saw the tourism slump as an opportune time to step up Phuket’s reputation among digital nomads. So, in August, he launched a co-working space, Let’s Work Phuket, on Rawai Beach at the island’s southernmost tip. It’s now seeing a mix of business from local ex-pats, remote workers from Bangkok, and Sandbox travelers.

He plans to do this by organizing regular meet-ups focusing on topics of interest for digital nomads, including investment, legal, and accounting. He also plans to organise social events such as muay Thai, paragliding, and yoga on weekends.

Building such communities in Phuket is key, since the island doesn’t yet have a co-working culture like Bangkok or Chiang Mai. Until now, Phuket neither had the vibes nor the facilities to pull in remote workers, said David Armitage, who is also launching a new co-working space, Grind Time, on Chalong Beach in November.