Blibli is private and doesn’t publish financials. But it seems as if the normal rules of raising venture capital from third parties and using that money to grow the core business until it becomes sustainable don’t seem to apply to it. Blibli hasn’t raised external capital and, seemingly able to draw unlimited funds from its parent, flexed its muscles again with the acquisition of SBL this year.

The difference between this move and Blibli’s past deals is that there’s nothing digital about its newest subsidiary. Ranch Market and Farmers Markets had only dabbled in online groceries in the past, mostly by partnering with third-party apps, like e-grocer HappyFresh. Beyond that, SBL remains strictly brick-and-mortar.

He estimated that less than 5% of total retail volume in this category happens online.

If Blibli plans to leverage the acquisition into kickstarting a lively groceries delivery segment on its platform, there’s a long way to go.

Indonesians’ habits around shopping groceries—and that includes the easier-to-ship packaged and durable products—haven’t really been disrupted that much by digitization yet, said Fitch’s Kurniawan. 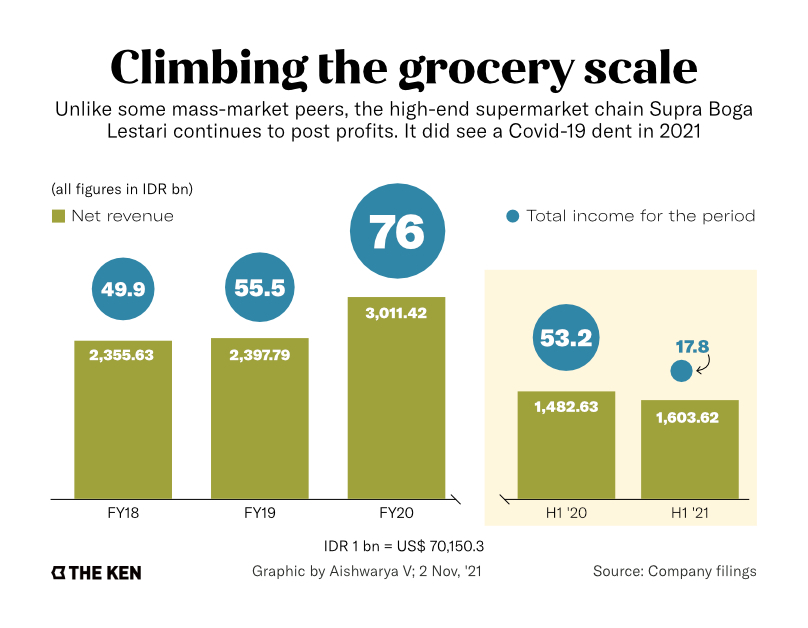 “Online platforms have been more disruptive in categories like clothing and electronics,” said Kurniawan. “I don’t think we will see online shopping for groceries take off soon, the way it did for non-food retail.”

Bain & Company partner Derek Keswakaroon estimated that only 2% of the groceries category is currently online but also noted that it is a fast-growing retail vertical. “It’s growing at a CAGR of upwards of 20%, faster than regular offline groceries, which is at 9% CAGR,” said Keswakaroon.

That makes groceries an interesting category for digital platforms, but one they’ll have to commit to growing and investing in for years to come.

In the past couple of years, though, what has already taken off in Indonesia is grocery shopping in neighborhood convenience stores. The pandemic only accelerated the affair.

Kurniawan attributes this to the rise of the mini-mart, which brought the large-format supermarkets and hypermarkets to their knees.

The two leading mini-market operators, Indomaret and Alfamart, put together, already have more than 15,000 stores nationwide, said Kurniawan. And they’ve only been adding more stores—Indomaret added 700 stores to its lineup in 2020, along with Alfamart’s 1,000.

Mini-marts inhabit a space that appeals to Indonesia’s middle- and lower-income segments. The clean, air-conditioned stores offer an experience that’s better than shopping at an informal, mom-and-pop store.

They’re also more convenient to reach than the hypermarkets, which are usually located inside malls or another commercial real estate.

That there’s a price difference between the two doesn’t seem to faze Indonesian customers as much. A bottle of iced tea, for instance, costs IDR 3,590 in a hypermarket and IDR 4,000 in the mini-market just across from it.